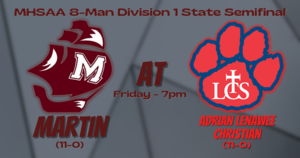 The Martin Clippers football team is getting ready for their 8-Man Division 1 State Semifinal rematch on Friday night, taking on the Adrian Lenawee Christian Cougars on the road.
The Clippers advanced to the State Semis for the second straight season, defeating the Mendon Hornets for the second time this season in a 41-22 win at Delton Kellogg on November 5th. The victory sets up an opportunity for the Maroon and White to avenge their loss to the Cougars last year at Adrian College, 47-12, in the same stage.

Both teams head into the contest state-ranked as the final four teams of the 8-Man Division 1 playoffs has three ranked teams remaining. Lenawee Christian, the defending champions in Division 1, are undefeated (11-0) and ranked second in the state. They are the highest ranked team in the division while the Clippers sit in sixth, also at 11-0. The winner advances to the 8-Man Division 1 State Finals on Saturday, November 20th, against either the Rudyard Bulldogs (9-2) or the Suttons Bay Norse (11-0) at the Superior Dome in Marquette.

This year's game is taking place on Friday, November 12th, at 7pm. It will be taking place at Adrian Lenawee School, located at 111 Wolf Creek Highway in Adrian.


Tickets are available now and once again, they are ONLINE ONLY tickets for $10.45 ($9 tickets plus $1.45 surcharge). Click here to purchase your tickets.

If you are unable to make the contest, click here to catch the game through the NFHS Network.